Cooking With a View

Posted by The Guild
Blog

This is not your average open kitchen.

Located on a raised platform in the middle of the 160-seat dining room and lounge, The Guild’s kitchen is right in the heart of all the action. Front and center of the kitchen is a large Argentinean-style, wood and charcoal-burning parilla grill – raised and lowered by a big crank handle. Flanking the grill on either side are two custom-made fridges standing 13 feet tall, filled to the brim with local meat and game.

“Open kitchens today have as much glamour and glitz to them as when they first came to be in vogue,” says O&B co-founder Michael Bonacini. “Even to me, as a seasoned chef and restaurateur, sitting at the pass and watching the guys work is wonderful.”

The elevated kitchen functions as a stage for not only cooking, but theatre. From flames flaring to cooks seasoning and pounding out steak after steak, there’s no shortage of theatrics.

Anchoring the kitchen is an enormous hand-crafted brass canopy with a radius of roughly 50 feet. The sheer size adds to the drama of the kitchen, while the material and colour blends seamlessly with The Guild’s whole “warehouse industrial meets urban luxe loft” vibe.

As if that wasn’t enough, directly below the kitchen is one of the most beautiful bars in Calgary. Not only does the bar offer the best view of the kitchen, but further entertainment from The Guild’s talented mixologists as they shake and stir an impressive array of cocktails.

If you want to be a part of a cut and thrust scene, simply pull up a stool to the bar and soak in the sights, sounds and smells of The Guild in action. It’s one of the best shows in town. 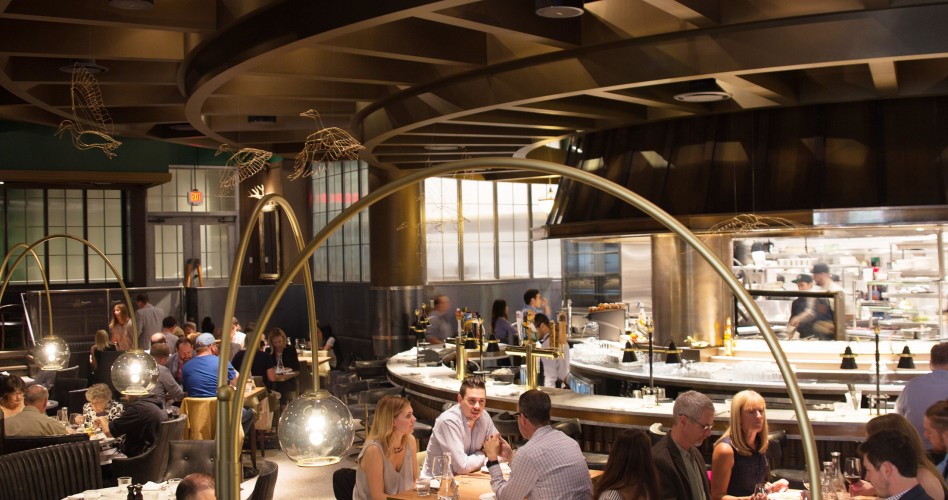